Home » Carol Danvers could learn magic and would be unstoppable: even Scarlet Witch fears her
Previous Next

Carol Danvers could learn magic and would be unstoppable: even Scarlet Witch fears her

Captain Marvel is one of the most powerful heroines in the Marvel Universe, to such an extent that her presence could be the difference between victory or defeat.

But, even with all that power, there are things that she simply cannot do, but that could be key to the survival of humanity.

Magic is an art that had been alien to her, but knowing the dark fate that the world has in store for, where millions of people lose their lives, including her fellow Avengers, Carol must conquer that weakness and learn sorcery at any cost.

In her new Marvel Comics series, Captain Marvel is transported to a timeline ruled by a dictator named Ove, son of Enchantress, and Namor, the king of Atlantis.

The only way to stop Ove is by learning to use magic, so he decides to go with Doctor Strange, the Supreme Sorcerer, but apparently the world magic community is not very convinced to give more power to someone who already is very strong.

In Captain Marvel # 28, Carol is haunted by nightmares in which Ove destroys her timeline.

Desperate, she and her friend Spider-Woman go to the Sanctum Santorum, the home and sanctuary of Doctor Strange.

Spider-Woman realizes the new relationship between Strange and Carol, so before dealing with the main topic, she has a talk with them.

Captain Marvel wants Strange to teach her magic, but the Sorcerer Supreme practically laughs in her face. Stephen replies that learning the mystical arts takes time, and that it would take away her greatest weakness, leaving everyone else vulnerable to her power.

Strange decides to help her, and after giving her a more appropriate costume for a sorceress, he takes her to a mystical place, where he speaks with several sorcerers, Doctor Voodoo and Talisman Wiccan, Niko Minoru, and Magik. 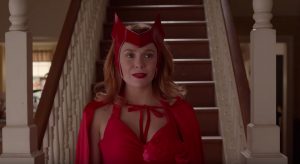 After seeing those magic users, Carol goes with Scarlet Witch to be her teacher, but surprisingly Wanda refuses to help her.

Scarlet Witch has a lot of experience when it comes to losing control with magic, so she doesn’t want Carol to find herself in a similar situation.

Wanda does not share Doctor Strange’s enthusiasm or optimism, so she tells Carol that sorcery is not a good path for her.

In the end, Captain Marvel is left with no other choice and turns to the most unlikely sorceress, Ove’s mother, Enchantress.

The wizarding community’s misgivings about Carol learning magic is not an exaggeration, as it would strip the Avenger of the only weakness she has, and while that could help defeat Ove, it could also lead her down a very dark path.

It’s not worth it to Wanda for Carol to position herself so close to the abyss just to avoid a rather uncertain future, and indeed there is a possibility that Danvers herself could become an even greater danger.