Home » Salma Hayek adopted an owl who threw up on Harry Styles: know the story
Previous Next

Salma Hayek adopted an owl who threw up on Harry Styles: know the story

Salma Hayek is an animal lover, and her house full of these beautiful creatures is proof of that. The Mexican actress is the mother of several dogs such as Bee and Lobito, horses, alpacas, rabbits and chickens. However, one of her most beloved pets and with whom she has a fairly deep bond is her best friend Kering, a beautiful owl. 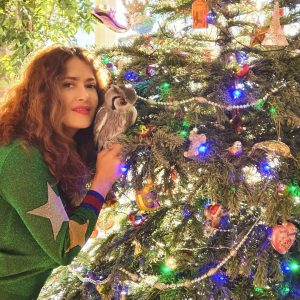 At the beginning of 2019, Salma saw an advertisement for rescued owls, and there she met this curious bird. In reality, Kering was listed as a Valentine’s gift for Hayek’s husband, businessman François-Henri Pinault. In fact, the name it has is in honour of Pinault’s company, which is called Kering and has an owl in its logo. 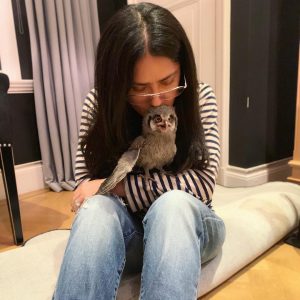 However, Kering had an immediate connection with Salma that has deepened more and more over time. Their bond is so strong that when François is away, Kering sleeps with the actress.

He snuggles into her head, watches TV with her and once she falls asleep, because owls are nocturnal, she likes to fly around the room and even if the sheet no longer covers Salma’s foot, Kering He mistakes his toes for mice, Hayek confessed to Ellen DeGeneres, and lunges at them. 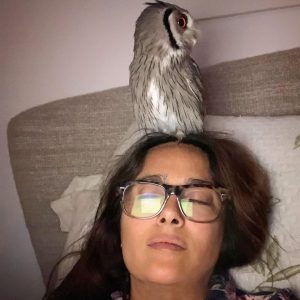 Hayek’s special bond with Kering allows her to spend beautiful moments together where the curious bird perches on her head and accompanies her in her daily routine.

Likewise, Salma explained to People that her owl accompanies her in her meditation sessions. She is the perfect companion because she stays super still next to her. Plus, she has a really nice vibe that just fills any room Kering is in with upbeat energy. 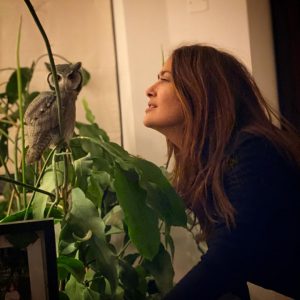 Kering lives loose in Salma’s house and sometimes accompanies her outdoors, where she enjoys fun moments with her human mother and her dog brothers, as the actress portrayed during a snowfall in London.

Salma’s owl is so famous that she has already had special photo shoots for magazines like People and has even been on the heads of other celebrities like Harry Styles, who unfortunately had a hairball regurgitated.

Salma shared this awkward Kearing moment with Ellen DeGeneres, and for a while, she refused to say who had that boot of rat hair vomited on. However, in the end, he revealed that it was the ‘Watermelon Sugar’ performer, who from the beginning was very excited to meet Kering and was not really bothered by this totally normal owl behavior when they just ate their prey.

Where to go on vacation? The best holiday destinations for Summer