Home » Salma Hayek outshines Ryan Reynolds and Samuel L. Jackson: she makes her own stunts in her new movie
Previous Next

Salma Hayek outshines Ryan Reynolds and Samuel L. Jackson: she makes her own stunts in her new movie

More than 20 years ago, Salma Hayek moved to Hollywood, and since then, she has built an extremely successful career where she has not only shown her talent in drama productions, such as when she was nominated for an Oscar for giving life to Frida Kahlo but has also impressed us with her great mastery of action scenes, which she has done without the need for a stuntman.

Yes! Since the beginning of her career, the talented Mexican has performed all her stunts, which increases the excitement to see her on the screen with her most recent projects, her leading role in the production of Marvel The Eternals, where she will play Ajak. , the leader of this group of superheroes, and Hitman’s Wife’s Bodyguard, a film where she shares credits with Ryan Reynolds and Samuel L. Jackson.

In 2017, Hayek first played Sonia Kincaid, the wife of mobster Darius Kincaid (Samuel L. Jackson) in The Hitman’s Bodyguard. Thanks to her action and combat scenes in this film, the actress emphasized that she is responsible for doing all her stunts.

In an interview with Den of Geek, Hayek admitted that in her first Hollywood movie, Desperado (1995), director Robert Rodriguez warned her that she should do all of her stunts because otherwise, she might be frowned upon.

So I was brainwashed, and I was always doing my stunts. I was really sorry, because I have two herniated discs, one dislocated… I have so many health problems now because of all those stunts. 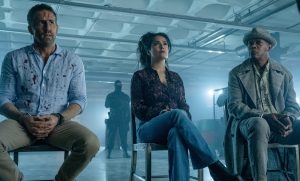 Despite these health problems and now knowing that it is totally normal to have stuntmen, the 54-year-old actress continues to do her stunts.

In fact the sequel Hitman’s Bodyguard’s Wife is the movie where he has done his best stunts, as revealed in a publication of Instagram. Judging from the trailer, the actress was extremely engaged with her combat scenes, jumping jacks, and even got the chance to do various sequences in the water.

In this film, we will see her face her opponents with various weapons, and she will even shoot masterfully while riding a motorcycle driven by Ryan Reynolds, who plays bodyguard Michael Bryce. Handling weapons is no stranger to Hayek, who has had multiple opportunities to fire different types of pistols, machine guns, and more, as in her film Everly (2014). 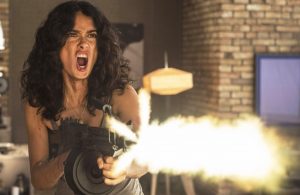 In Hitman’s Wife’s Bodyguard, she will also have several melee combats, which she has also done in other films such as Bandidas, where she shared the screen with Penelope Cruz.

In addition, she will be close to big explosions, moments of risk that have been in her life since she gave life to Carolina in Desperado (1995).

As we can see, Salma has a long career in action films, which has given her great expertise in stunts, which, despite the fact that the next day her body takes its toll, as she revealed in an interview for Variety, they are scenes that she really enjoys.