Home » The actors of ‘Friends’ confessed that they had not seen each other in 9 years: we tell you why
Previous Next

The actors of ‘Friends’ confessed that they had not seen each other in 9 years: we tell you why

Friends is one of the best comedy series of recent times, and much of its success has to do with the incredible chemistry that exists between the actors who gave life to Rachel, Monica, Chandler, Joey, Phoebe, and Ross.

Jennifer Aniston, Courteney Cox, Matthew Perry, Matt LeBlanc, Lisa Kudrow, and David Schwimmer enjoyed one of the most genuine friendships on television for 10 seasons. However, a recent revelation from David made us question whether they are really as close as we thought they were, having only seen each other twice since the series ended in May 2004. 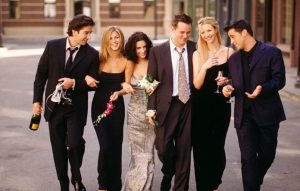 Is the cast of ‘Friends’ really as close-knit as its characters?

On May 27, 2021, the long-awaited Friends cast reunion will arrive on HBO Max. This television special is crowned as an epic moment for many fans who yearn to see Rachel, Monica, Chandler, Joey, Phoebe, and Ross together again.

The legendary and long-awaited reunion is something memorable for Friends fans and for the same cast that had the opportunity to be all together for the SECOND time during these 17 years.

One would believe that the friendship they created on set would lead them to spend many moments together after the series ended. However, David shattered our expectations when he shared in an interview with People that filming the  Friends: The Reunion special was crowned the second time the six leads have been together since the last episode of the series was shot.

We had only been together once in the same room, I think nine years ago and until yesterday.  David explained that this does not necessarily mean that they stopped seeing each other for years. Actually, they do see and enjoy outings and experiences together, mainly Jennifer, Courteney, and Lisa, but sadly the six had not coincided at this time.

Sometimes some go, and others go, which is understandable if we take into account their tight schedules and that not all of them live in California: Schwimmer lives in New York.

The entire cast hasn’t been together in quite some time.

Also, Matthew Perry commented that they are a very united group but that actually being the six together and at the same time it does not happen very often.

However, despite not being face to face all together, the six actors and actresses acknowledge that they have an extraordinary friendship that is not damaged by time or distance. In the words of Lisa Kudrow:

“I know I can text or call them, and I feel like we can pick up right where we left off and feel like time hasn’t passed. We are connected no matter what. »

Like her, Matt LeBlanc expressed that the friendship between the six of them is unique and is one of those few relationships in life where you can enjoy honest, open, and confident conversations.

When we are together, it is as if time has not passed.

Courteney Cox commented that the friendships that emerged from the show continue to be as close as when they shared their lunch every day during the 10-year run.

For her part, Jennifer Aniston explained that playing Rachel not only allowed her to have one of the best jobs of her career, but also to find a family in her co-stars.

The friendships and family that came up are just … you can’t really put words to that. Priceless.

Finally, the cast agreed that their connection with each other is similar to having brothers and sisters. Lisa expressed that in a few words, they are connected, to which Jennifer replied, “until death do us part.”