Home » The Dangers of Childhood Obesity
Previous Next

The Dangers of Childhood Obesity

Childhood obesity is a serious and delicate issue that deserves special care in preventing and look more specific in the diagnosis and treatment.

Today, the disease is considered the most recurrent among children in the world. It is estimated that in the last 30 years, the number of overweight children and adolescents has increased by 5 times.

With the advancement of industrialized food production, it is normal to see families adopting irregular diets that are low in important vitamins for the body. But those who think that childhood obesity is only caused by poor diet are wrong. There are other risk factors that contribute to the development of the disease, such as:

Lack of Physical Activity: sedentary lifestyle is one of the main factors for weight gain. Due to urban violence, the advancement of technology and, recently, social isolation, children stopped practicing activities outside the home, such as sports, and started to be entertained only with electronic equipment, such as cell phones, television, and video games, which do not require physical effort.
Hormonal Factors: it is normal to notice an increase in weight in children and adolescents who have some hormonal dysregulation, such as excess insulin or growth hormone deficiency.
Genetic Factors: it is scientifically proven that those who have obese parents are more likely also to develop the disease.
Anxiety or Depression: Obesity can also be caused by emotional imbalances. When faced with trauma or conflict, it is common for the child to allow himself to eat more and in larger quantities as a form of compensation.
In countless cases, childhood obesity is a consequence of the way family members live. Healthy eating is a habit that is taught from an early age, and it is only up to parents to set the best example, especially when the little one already shows signs of being overweight.

What are the dangers of childhood obesity? 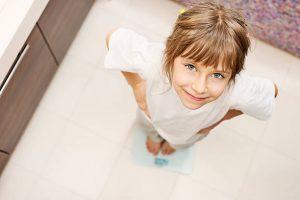 Childhood obesity deserves even more care than obesity developed in adulthood, as the individual can acquire chronic diseases earlier and more easily. Thus, contributing to a worsening in quality and life expectancy.

Other than that, the child or adolescent can also develop eating disorders, such as bulimia or anorexia, and present emotional and social problems, such as low self-esteem, depression, and even bullying.

How to identify childhood obesity? 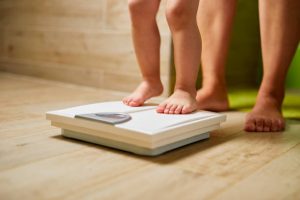 Initially, it is important that parents pay attention to their children’s routine and, especially, their diet. When you notice signs of being overweight, or even some complaints such as difficulty moving or breathing, seek help from a pediatrician.

The professional will perform the appropriate clinical examinations to understand and even reverse the patient’s condition.

In cases of obesity, dietary and behavioral re-education will be indicated with the help of parents and the supervision of a doctor. A new diet will make up the child’s routine and regular physical activity and check-ups to monitor the body’s fat, sodium, and glucose levels.