Home » The ‘Freaky Friday’ mistake you never noticed: they ruined a character in the worst way
Previous Next

The ‘Freaky Friday’ mistake you never noticed: they ruined a character in the worst way

In 2003 Lindsay Lohan was the youth star of the moment, so Walt Disney Pictures launched a funny comedy starring her.

For one day, they both changed bodies, and they knew what it was like to literally be in each other’s shoes, their problems, their dreams, and their worries.

It is assumed that mother and daughter changed bodies after they ate some mysterious magic cookies, but they did not know that there was another pair of desserts with the same powers.

Those cookies were to be eaten by Harry Coleman and his grandfather, and maybe it would have been the start of another funny mess story if it weren’t for the Chinese restaurant owner where those snacks came from. 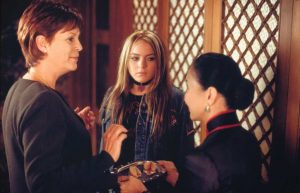 To avoid a similar catastrophe, Pei-Pei knocked Harry down to grab the cookies. Right at that moment, a mistake happened that until now, 18 years later, we realized.

Tik Tok user thegabbienicole first noticed that just as Harry and his grandfather were taken down, a considerably older actor took over for the boy.

The girl discovered that before Pei Pei discovered the cookies, Harry was a cute boy who was going to have dessert with his grandfather, but just a second before the onslaught, he was replaced by an adult actor (perhaps a stunt double) dressed exactly like the young actor.

It is very curious that this small error has not seen the light after so many years, although it is probably due to the speed at which the scene passes.

It is not the first video on this platform that shows errors or curious things in the movies, especially Disney.

For example, another Tik Tok user revealed a rather disturbing fact from the Hercules movie, which takes a different look at the story and at the same time is closer to the real mythology version of the son of Zeus.

But surely it is one of the most amazing mistakes, especially because of how obvious it is and because it went unnoticed for many years.

Do you think Tik Tok users will find more mistakes in Disney movies soon? Did you discover one recently? Share it in the comments.