Home » The scene from ‘The Umbrella Academy’ that was not acted: Five fell for real
Previous Next

The scene from ‘The Umbrella Academy’ that was not acted: Five fell for real

The actor who plays Cinco in The Umbrella Academy shared a behind-the-scenes look at the series in which he shows a ridiculous moment from the filming that ended in the final Netflix cut.

The Umbrella Academy, Netflix original series based on the Dark Horse comics created by Gerard Way and Gabriel Blá, is one of the platform’s most successful productions in recent years.

With two seasons to date, The Umbrella Academy portrays the life of a group of dysfunctional siblings with superpowers who were adopted by the eccentric millionaire Reginald Hargreeves. 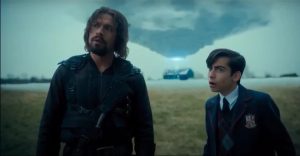 Number Five, or Five, played by Aidan Gallagher and became one of the audience’s spoiled characters for having the personality of an elderly man trapped in a teenager.

Despite looking like the youngest of the bunch, Cinco is the most level-headed and experienced of the siblings because he survived the apocalypse and became a time-traveling hitman.

But even as the most serious of the Hargreeves, Cinco has had funny moments on the film set commensurate with his age, which Aidan Gallagher actually has.

To make Cinco travel back in time, the production occupies a green screen and a giant wind machine, which are then disguised with computer digital effects.

Despite working on a millionaire production, the cast is not exempt from mistakes and accidents on set; especially Gallagher, who is constantly exposed to the wind machine.

There are times when the power of the machines is uncontrollable and comes to ruin the scenes; or to stay in the final result, as happened with Five.

Gallagher discovered the harshness of the wind machine during his first moments of filming in Canada when he was filming the scene where he lands in the Hargreeves yard during his funeral. 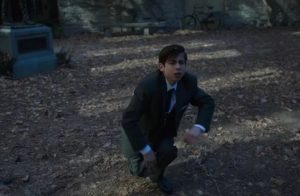 To record the scene, the actor had to wear loose clothing, in addition, he had to climb on a wooden box and scream while waving his arms in front of the wind in his face.

In the final cut of the series, Five falls to the ground from the time portal and stands up with the seriousness that distinguishes him to introduce himself with his brothers.

Actually, the original shot was no different than what Netflix showed, because, in the filming, Gallagher was so into the role that he fell from the wooden crate while screaming and waving his arms, but he got up to continue with the scene in a professional way.

The fall was part of the script, so Gallagher had to repeat the scene several times; However, the final cut of the series resulted in an accidental fall of the more natural actor than previous attempts. 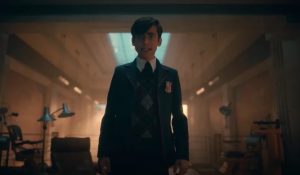 The recording of the scene was revealed in a behind-the-scenes video shared by Aidan Gallagher on his YouTube channel, where he also shows other funny moments from the filming of the series.

The post-production team did their job to make the scene look good with special effects, but behind-the-scenes shows that even if the scene is ridiculous or bumpy, it can end in the final cut, and the actors must always stay serious.