Home » Tom Holland’s new suit in ‘Spiderman: No Way Home’ leaked: it was a toy’s fault
Previous Next

Tom Holland’s new suit in ‘Spiderman: No Way Home’ leaked: it was a toy’s fault

The Spider-Man: No Way Home toy line leaked what Tom Holland will look like in the new suits and hinted at what will happen in the movie.

After the departure of Iron Man and Captain America from the Marvel Cinematic Universe (MCU), Spider-Man became one of the favorites to fill the superheroes’ role, despite being so young.

Additionally, rumors and clues about the arachnid’s third movie, Spider-Man: No Way Home, indicate that there will be a crossover of universes with previous Peter Parkers, officially creating the Spider-Verse in the MCU.

Except for Alfred Molina’s statements regarding his return as Doctor Octopus, the details of the film have been kept secret, and there are not even clues about the plot.

However, the suit that Tom Holland will wear in the next installment was revealed thanks to a LEGO set published in the European version of the toy store. 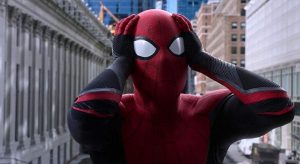 The spider symbol on the chest is larger than in previous versions and extends the limbs over Peter Parker’s torso.

The LEGO set also shows Doctor Strange and Wong helping Spider-Man in a fight and MJ using a candlestick to fight Peter.

The toy sets are not always accurate with the scenes from the movies, so it does not ensure that the battle will happen in Spider-Man: No Way Home.

Funko’s Spider-Man, in addition to confirming the LEGO suit, revealed that Peter would receive modifications to the suit thanks to Doctor Strange, since Pop has a reactor similar to Iron’s on his chest, but in the shape of a spell and another like it.

These projections are reminiscent of the portals that Doctor Strange uses to transport himself from one place to another, so it could be a clue to the abilities that Spider-Man will show in the new movie.

Also, the Funko and Hasbro figures revealed that Spider-Man will use a black suit with gold, something that has not yet been seen in the MCU.

It’s still unclear how the new suits will fit into Spider-Man: No Way Home; however, the clues are exciting for the possible adventure in the multiverse with the help of Doctor Strange.

Spider-Man 3 will hit theaters on December 17, 2021, but the trailer is likely to be available in the next few weeks.